Cars that go swimmingly with water.

Who, at least those born in the 1980s and earlier, can forget that moment James Bond drives his kitted-out car off a peer under helicopter gunfire into a harbour… and it transforms into a submarine?

That was pretty awesome and filled many a boy (and a few girls) with heroic fantasies of driving an amphibious car capable of doing fancy driving and diving.

The truth is, fiction is not far from fact. It’s true. The amphibious car exists and have done so for quite some time now. 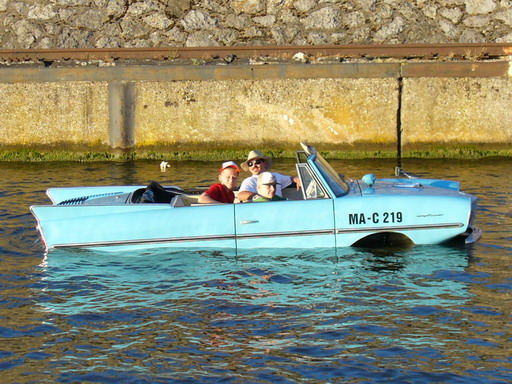 “Donna mind us. We ah just going for a wee sail, laddie.”

Firstly, that is most definitely a car. And secondly, as you can no doubt tell, they’re not having that sinking feeling.

The idea for the amphibious car isn’t even that new either. It’s almost as old as the first motor-powered vehicle itself. It’s believed someone came up with it around about the turn of the 20th Century, actually.

Oh, they were just as ambitious in those days as we are now where technology is concerned. For absolute centuries, especially during the Medieval period, the pace of tech development was painfully slow. Then we hit the Industrial Era and suddenly everyone became caffeine addicts and worked overtime to come up with the best ideas, the fastest.

Hence the comparison of a couple of centuries where not much happened except jousting tournaments and witch burnings to a period of time where we went from phones you had to literally ring with your fingers, to smartphones thousands of times more powerful than the room-sized computer used to land three men on the moon.

It still took a bit of time before any real development happened with the amphibious car. Then World War II came along, giving most of the planet a really bad day that lasted for years, and saw significant development on the half-automobile-half-boat. The most well-known from this period was the subtly named Schwimmwagen.

We trust that even if you don’t know your German from your Japanese, you can still guess what the name translates to in the English language. (And out of curiosity, and this just popped into our head, anyone heard from David Schwimmer lately?)

The Schwimmwagen was a small military 4×4 modelled on the jeep and was developed in 1942. It saw plenty of action during the war. As an amphibious vehicle, it would give its operators some combat advantage seeing as it was literally all terrain… including “terrain” made of H2O.

But here’s one for the history books. An Aussie adventurer called Ben Carlin decided to circumnavigate the world in an amphibious vehicle. He drove and sailed in a modified Ford GPA which was christened the “Half-Safe”.

The journey began in Quebec, Canada and completed an audacious transatlantic crossing. Then onto Europe, travelling overland through the Middle East (also daring considering the 1950s was a bit of an unsettling time). He got to Australia, again sailing the friendly seas (though this time it was transported by steamer).

Next, it was to South-East Asia and the Far East, to the northernmost point of post-war Japan (“just don’t mention the war, mate” we like to imagine him saying to partners he picked up while in Oz). Then the coldest part of his trip… Alaska. Even the polar bears must have been confused.

He took a tour through the US and Canada, finally returning to Quebec.

Years taken to reach starting point: a decade’s worth.

It seems the Half-Safe kept him safe the full time. 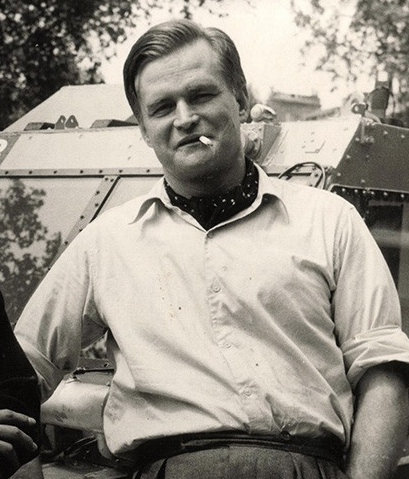 Since the 1960s, amphibious cars have become increasingly popular. The Amphicar (fig. 1) is especially so. It is still, to this day, the most successfully produced amphibious car used by ordinary civilians. (Must be an overseas thing, since we don’t see many, or any, here.)

Then there’s the Gibbs Aquada. 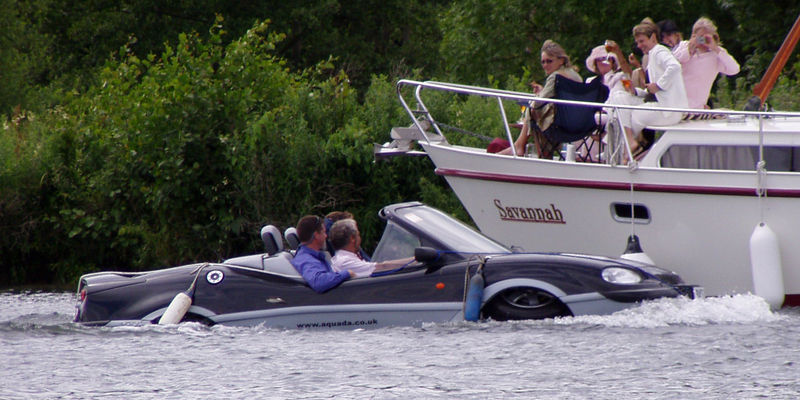 Quite a sexy little thing. Look at it alongside that boat.

We’d be gawking too. It’s renowned for the speeds it is capable of – 160 km/h on land and 50 km/h on water, which is about 27 knots (so called because long before speedometers, ships used literal knotted ropes to determine the speed they were travelling at).

It is essentially a true hybrid, in that it isn’t a boat capable of driving on land nor a car capable of sailing in water, but, well, both a boat AND a car. It involved a lot of technological innovations and had 60 (SIXTY!) patents in the course of its development.

It may be a while before we see someone in an amphibious car cruising around in the Vaal or Gariep, but if you happen to be that person, and you’d want to sell, you know that we’ve got an app for that.