Surf’s Up for a Surfer Dude Selling His Beach Buggy.01 August 2019Next

The Future History of Flying Cars.

It once seemed the stuff of science fiction dreams. Cars that could fly. Like something out of the classic time-travel movie, Back to the Future Part II. Flying cars.

But it’s increasingly looking like our daily commute will soon involve taking to the skies. Keep in mind, “soon” is around the 2030s, based on current predictions. But that’s only a decade and a bit away. Imagine going to work by stepping into a “motoring” machine that lifts off vertically, then flies almost like a helicopter does, and then sets you down by the office. Parking bays will certainly look interesting.

And helicopter is a good comparison as the “lift” that allows these cars to fly will be similar to how a helicopter works. Or, more accurately, how drones operate.

The Terrafugia Transition is technically a flying car – it looks like a strange love child of a light aircraft and a futuristic mini-car. Mini-car because it requires a certain maximum weight for lift, and to adhere to the US’s federal light aircraft regulations.

It experienced its first flight on 5 March 2009 as a proof-of-concept vehicle and could travel on the road at about 100 km per hour. Flight speed? Around 187 km per hour. Not exactly a Boeing 747, but definitely a great way to by-pass heavy traffic, as between Johannesburg and Pretoria’s notoriously slow rush hour stretch.

The planned date for final customer production kept being extended as developments to the craft continued to be implemented. Its latest date was to have been July 2019, but as yet it still hasn’t been released to the general public.

But the latest developments are flying high. Flying car high. 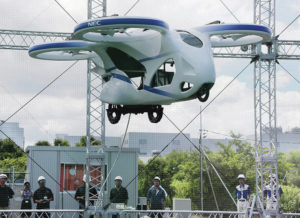 Meet NEC Corp’s flying machine. It has propellers that allow it to lift off the ground. This picture, taken in Abiko, close to Tokyo, is essentially a large-scale drone that “flew” for approximately a minute.

It is large enough to carry passengers. It’ll be part of the automated vehicle range, which means you won’t need a pilot’s licence simply to get to work. It’ll handle the flying for you. If the thought of being flown by an automated vehicle through the friendly skies scares you, well, you have about 12 or so years to get used to the idea.

The Japanese government is fully behind this initiative, meaning potential legislative issues will be taken care of relatively quickly. According to the current plan of action, the country wants these things flying around cities by 2023 and transporting people a decade after that.

Japan is made up of four major islands (and a series of much smaller ones) but it has over 100 million people. As such, there’s a heavy congestion problem in the country’s cities. The belief is that by supporting flying car technology, this congestion will be relieved.

Currently, other countries that are interested in flying cars are Dubai, New Zealand, and Singapore.

One of the most prolific companies in the world, Uber, plans on taking to the skies sometime in the near future. Sadly, this means a lot of drivers in many countries will be put out of what can be quite a lucrative job.

But as happens with much innovative technology involving machine learning, the human element is no longer needed as much.