Ride of the Valkyrie

The Aston Martin Valkyrie is coming out this year. Even fictional characters like James Bond are salivating at the thought of slipping inside its doors and onto plush leather seats before turning the ignition on and putting foot to pedal.

This Valkyrie will certainly come in screaming hot – its creators say the title of fastest street-legal car belongs to it.

It’s fitting that the Red Bull tag-line is “Red Bull gives you wings” because it suits the winged horse ridden by valkyries of Norse legend. Red Bull actually collaborated with Aston Martin to design the car – Adrian Newey is the Chief Technical Officer for Red Bull Racing. He is considered by some to be the world’s most successful F1 designer. Which fits, because it seems like it is a F1 car designed to be like a street car, rather than the other way around (as is often the case with sports cars).

The Valkyrie has your typical sports car body – that is, there’s no place in the back for the kids. It is the height of aerodynamic design. Beautiful curves adorn the body of the vehicle, which will lend to a diminishment of air resistance.

According to Aston Martin’s own site for the Valkyrie, it has an advanced mid-mounted powertrain – which is definitely inspired from its F1 roots. It uses V12 technology, and you can just imagine the throttle response on it.

The V12 is an incredible 6.5-litre engine. That’s plenty of horse power. And don’t let the fact that it is a hybrid deter you. This beauty is torque-enhanced for that moment you put your foot down on the accelerator to launch and uses its electric motor to give it a power boost.

And the body will be light enough for flight. It boosts zero steel – instead, the hypercar’s body is carbon fibre. We’re ready to fly to fly to Valhalla in this baby. 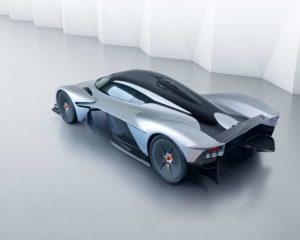