Hold onto your hats, everybody. The upcoming Golf GTI Mk8 is threatening to blow them away. This very hotly anticipated car is going to be released here, in sunny South Africa, soon. And as we all know, GTI is one of the most fun ways to “play” Golf. Every Golf GTI generation kept scoring a hole-in-one for us, with its superb value for power ratio.

Now, we’re starting the first year of the new decade with one that has plenty of VW fans salivating in anticipation.

The engine driving the thing.

Firstly, onto the basics: the engine is part of their MQB platform, an engine developed to function in traverse (the crankshaft axis is perpendicular to the direction you’re driving in), with a front-wheel drive.

It has the same version of this engine as is currently being used by the 3rd generation Audi A3, another car we happen to love.

As you can see from the picture, the Mk8 doesn’t deviate all that much looks-wise from the Mk7. Admittedly, the Mk7 is a stunner, though.

What has changed is what you’ll find on the inside. Like two beautiful people, one just having a much better personality. 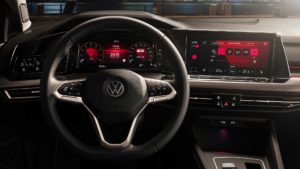 There are the optional Matrix-LED headlamps – with each lamp containing 22 stunning LEDs. That’s bright enough to make you visible even in the foggiest weather. And certainly, helpful at night, especially in parts of the country without streetlights, including parts of the city without working streetlights.

You’ll also find the cab has a new system, the ‘Innovision Cockpit’ which gives you a complete digital display rather than the traditional needle points for the speedometer, for example.

Showing signs of some autonomy.

For your driving convenience, there’s a semi-autonomous mode which allows for adaptive cruise control, meaning it will sense the speeding up, slowing down, and hard braking of the driver in front of you, and adjust the cruising speed automatically. You’ll just need to be ready to take control at a moment’s notice.

Also, it has lane-assist, normally reserved for more premium vehicles. That’s helpful if you’re the sort whose mind tends to wander off… and you start wandering into someone else’s lane.

It will feature shift-by-wire DSG (DSG, of course, being automatic gear-changing). Shift-by-wire tech translates to a smaller knob on the gearchange stick, making for slightly more convenience. Though it’s not that big a deal with a vehicle that isn’t a manual, it will be noticeable with the reversing and driving and reversing again when doing three or more-point turns.

Oh yeah, you’ll also have “someone” to assist you should you need it – simply by issuing voice instructions like, “Call up Barry”, “Send an SMS to Sally to say I’m nearly there,” “Put on my Ninja Tunes playlist from Spotify,” etc.

Her name is Alexa and she’s established quite the reputation for herself in recent years.

Overall, one could say the Golf Mk8 will be a complete digital rehaul. Very exciting for those into their tech.

This charming and speedy as heck Golf is one of the many things we look forward to in the next decade.